Michael Short’s “Let’s Go Outdoors” joins some Canadian Fish & Wildlife officers as they practice swift water rescue skills in the Athabasca River with Joe Storms. Joe is an ACA certified Pro Canyon Guide, swifwater rescue instructor and Jasper Park Warden. The icy waters near Jasper were a real challenge for these recruits as they personally got to experience the thrill and terror of being carried along in the fast flowing river.

The ACA’s Rich Carlson traveled to Hakuba Japan in May to train canyon guides from Japan, Australia and the UK. All of the students passed the required assessment for certification as Fixed Site / Single Pitch Canyon Guides, with a few just shy of meeting the requirements for the Pro Canyon Guide level.

Congratulations and welcome to the ACA!

In this video ACA Instructor, Rich Carlson shows a variety of ways to tie and rig webbing on single-point anchors to address issues that include position, redundancy, strength, efficiency and equalization. Rich also demonstrates three different ways to set up courtesy rigging for rappels. 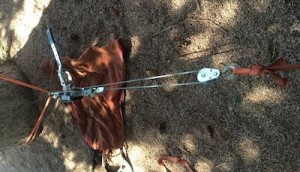